Wiebke Hoogklimmer was born in Hannover, Germany, and began her musical education at the age of eight as a member of the "Girls Choir Hannover". She continued her education at the Academy of Music and Acting in Hamburg where she studied opera direction on the course initiated by Prof. Goetz Friedrich and Prof. August Everding, and graduated with distinction.
She has worked as assistant director, stage manager, and substitute in the artistic management office at the Niedersaechsischen Opera in Hannover, the Hamburg State Opera, the German Opera Berlin and the International Summer Course at Schloss Weikersheim. During this time she worked with the following directors and stage designers: Guenter Roth, Stephan Mettin, Martin Rupprecht, Hans-Peter Lehmann, John Cox, John Dew, Erhard Fischer, Herbert Wernicke, Goetz Friedrich, Andreas Reinhardt.

After finishing her studies she started private vocal tuition with Elisabeth Umierski (Berlin) and continued with Prof. Annie Schoonus (Academy of Music and Acting in Hamburg) and with Christiane Bach-Roehr (Comic Opera Berlin).

Wiebke Hoogklimmer mainly works as a solo contralto, giving concerts and recitals. Her repertoire ranges from baroque to contemporary music. She equally enjoys singing well known and lesser known and unusual works.
A good example is the recital she arranged with the male alto Dirk Klawuhn containing songs by Purcell and Blow. The highlight of this recital is the duet "Ode on the Death of Mr. Henry Purcell". The interesting and unusual feature of this interpretation is the female alto singing the lower part and the male alto the higher.
Her repertoire so far includes, amongst other pieces, Handels Messiah, Pergolesi's Stabat Mater, Bach's Christmas Oratorio (performed in the Berliner Dom), St. John's Passion, Magnificat, Vivaldi's Gloria (D major), Monteverdi's Magnificat, Mozart's Coronation Mass, Spatzenmesse, Mendelssohn-Bartholdy's Paulus, Elijah, and Rossini's Petite messe solonelle.

In 2003 her CD "Clairières dans le ciel" was published with the so named song cycle by Lili Boulanger - transposed for contralto - and with selected songs by Schubert and Mahler, and at the piano Patrick Walliser. The Label is THOROFON (order-nr. CTH 2477).
2006 her CD "Franz Schubert: Winterreise" was released with a live recording of a Lieder Recital (on the Piano again Patrick Walliser) with her own Label.

Wiebke Hoogklimmer is living in Berlin since 1985. 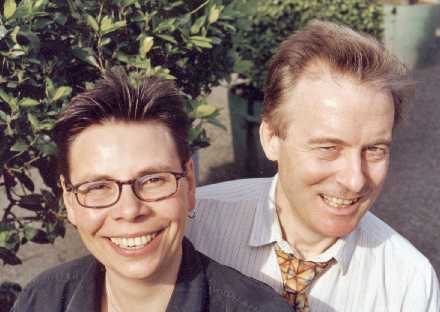 Patrick Walliser, born in Switzerland, is piano professor at the "Universität der Künste" (UdK) in Berlin. He has a lot of experience working with international singers at the German Opera Berlin as well as working as a conductor in Kiel, Ulm and Wiesbaden.
Furthermore, he worked as assistant to Giuseppe Sinopoli in Berlin, Rom, Taormina, and at the Milan Scala and as co-conductor of Johannes Kalitzke during the "Steirischen Herbst" and in Paris, Vienna and Berlin.
His particular love - apart from some excursions into the areas of chansons and theatre - is accompaniment in recitals.
He played one of the 4 pianos in Aribert Reimann's opera "Bernarda Albas Haus" at the Comic Opera Berlin and worked on other productions there as well. He has worked also for the RuhrTriennale (Die Soldaten) and for the EuropaChorAkademie.